Praying Through the Storm

Have you ever been in a storm, feeling like you were drowning?  You knew you needed to just pray, but you couldn’t focus?  You knew you needed to look to Jesus, but the wind and waves were blowing in your face and forcing your attention to be on them.  You didn’t know what to pray or how to pray.  All you knew was that you needed to pray, you needed help from the only One who could help!  I’ve been there.  We’ve all been there or will be.  So, what do we do in the midst of the storms in order to focus on Jesus, despite the wind and waves that are blinding?  I believe God’s Word is the answer.  Open it and see what He has to say.  I often turn to Psalms during times like this.  No matter what we go through, there is a Psalmist who has been there.

In August, 1992, Hurricane Andrew demolished much of south Florida, including Homestead Air Force Base, where my husband, Steve, and I had our first home together.  We evacuated as the storm approached and watched the storm safely, from a distance, on t.v.  After the storm was over and roads were reopened, Steve went back to our house to see if there was anything salvageable, but there wasn’t much left.  A few days later, we went back to get the things that could be dried off, like dishes and cookware.  We put them in storage, and waited to see what was next.  We lived with a sweet family, in Orlando for over a month because my husband’s command had set up a temporary work station there.  We waited and waited to see if the base was going to reopen or not.  When it was determined that the base would not be rebuilt, we waited to see where the Navy would move us next.  It was a tough season, but God was good to us.  He protected us in that storm, provided people to give us shelter and others who gave us the things we needed to rebuild our lives.  We moved on and began again. God taught us many things during that season after the storm and the years that followed.  He is good.  He is faithful.  He never leaves us or forsakes us.

Then in September 2004, we were stationed in Pensacola, FL and Hurricane Ivan was threatening to make landfall right over us.  Once again, we evacuated in order to ensure our safety.  This time we stayed at a friend’s parent’s house in Birmingham and watched the storm on t.v.  As I sat there watching it all, I was anxious.  All the memories from Hurricane Andrew came flooding back into my mind.  I remembered driving back to our house in Homestead after the storm and having trouble finding it because so many landmarks were gone.  I remembered the unique, wet smell of my house after it had been full of water for days.  I remembered opening closet doors and getting drenched with water that had collected in them.  I remembered the broken windows and dripping ceiling.  I remembered the months of not having my own home and wondering where we would live next.  I remembered the good-byes that never happened because we all evacuated so quickly.  I remembered how hard it was and I didn’t want to do it again.  This time we had young children.  It would be harder to do it all with them.  As I remembered it all, my mind began running through all the what if’s.  I knew I shouldn’t be anxious.  I knew that God had taken care of us the first time, and He would take care of us this time.  I knew I shouldn’t be afraid, but I was.

As I sat there, watching the storm on t.v. and fretting, I opened my Bible to the beginning of Psalms and tried to read.  It was hard to focus, but I plugged along trying to keep my mind stayed on God.  Then He spoke to me through Psalm 29, a Psalm of David, written in the midst of a storm, and it immediately gave me peace.

That Psalm reminded me that He was in control.  His powerful, majestic voice was over that storm.  He was on His throne and He would give us strength and peace, just as He had after Hurricane Andrew.  I was finally able to go to sleep.

The next day, we woke up to the news that  the hurricane had caused much destruction.  The kids and I went to stay with family while Steve went back to check on our house and get ready to go back to work.  When he got back, he found very minimal damage to our house.  There was only a pine tree laying on the garage, and that tree had caused no damage!  There wasn’t even a broken shingle!  It was as if it had been gently placed there.  After electricity was restored, the kids and I returned home and when I saw the house for myself, I remembered reading Psalm 29:5 during the storm.  “The voice of the LORD breaks the cedars.”   That tree was placed on the garage to remind me that God was sovereign over that storm, just as He is sovereign over every storm.  He was sovereign over Hurricane Andrew.  Though He allowed us to lose most of our material possessions in that storm, He worked it out together for our good and we praised Him.  He was sovereign over Hurricane Ivan as well.  This time, He protected us from all harm and we praised Him again. 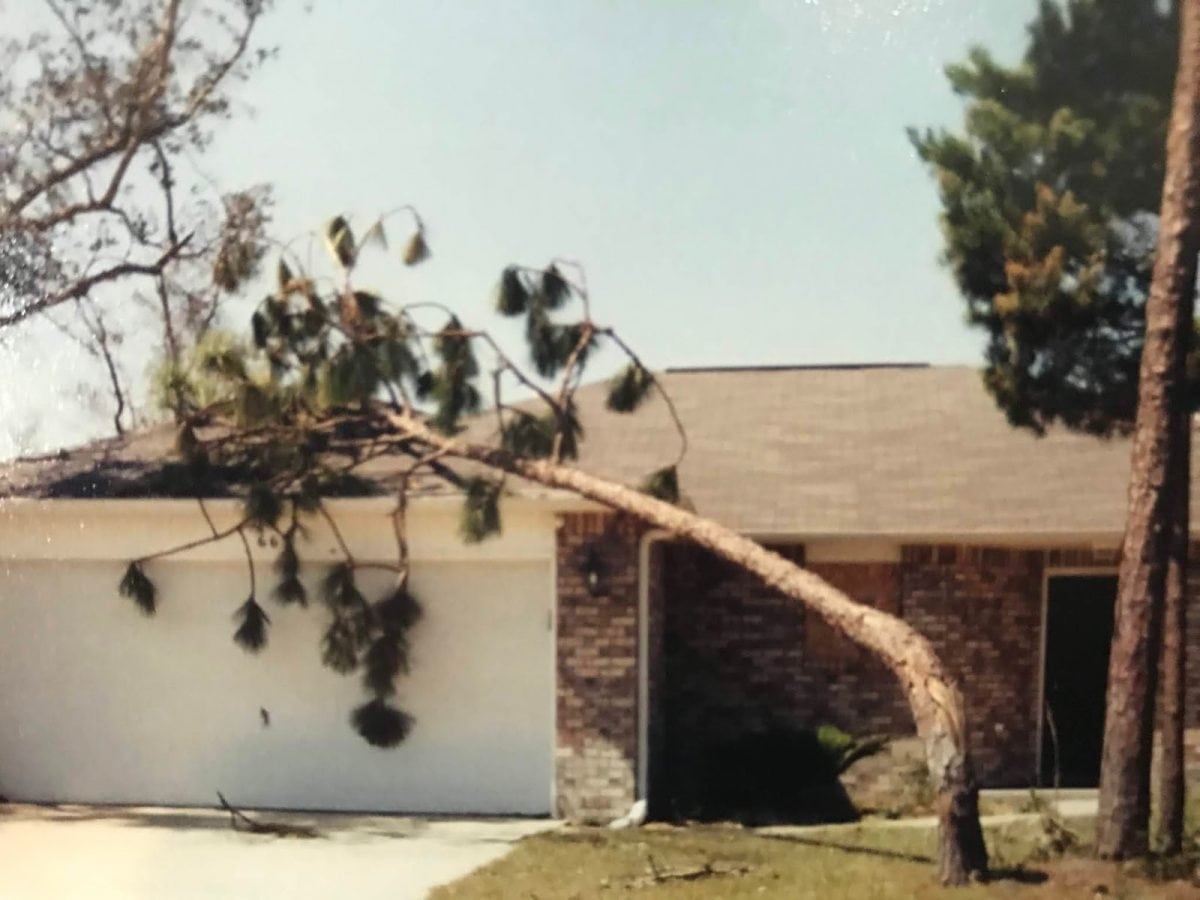 Today as I read Psalm 29, I was reminded of the many storms I have gone through over the years, including these hurricanes.  God has proved faithful over every single one.  Over and over again, it has been His word that has sustained me.  When the wind and waves are in your face, open His word.  He will meet you there.  If your eyes are too blurry to see it, listen to it.

“Forever, O LORD, your word is firmly fixed in the heavens. Your faithfulness endures to all generations; You have established the earth, and it stands fast.  By your appointment they stand this day, for all things are your servants.  If your law had not been my delight, I would have perished in my affliction.  I will never forget your precepts, for by them you have given me life.”  –Psalm 119:89-93

Spread the love
Posted in Uncategorized